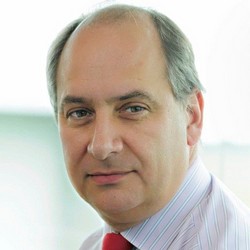 David has been in the Defence & Aerospace Engineering business for in excess of 30 years. He started his professional career at British Aerospace’s corporate research centre in the mid-80’s, having graduated from the University of Bath, England with an Honours degree in Applied Physics.  Whilst with the BAe Corporate Research Centre he was involved in supporting  a diverse range of military/civil,  space /aerospace programmes.

In 1998 he transferred into the BAe Airbus division and, with the creation of the new single integrated Airbus company in 2001, move to the new company as Head of Flight Physics R&T. Nine years later he left the domain of Flight Physics to take up the position of Head of Policy & Development within the Airbus Landing Gear Engineering Centre.

In 2013 he was appointed Director, Research & Technology for Airbus Americas Inc.  In this current role, he is responsible for the maintenance and development of the Airbus Research programme in the Americas.

Throughout his career he has been involved in many technical advisory boards and groups, at regional, national & continental level.