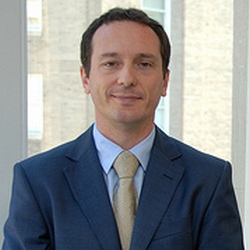 Born on May 27, 1973 in Villeneuve-Saint-Georges in the Val-de-Marne department in France, Fabien Fieschi is a graduate of Sciences Po in Paris. He also holds a certificate in International Relations from Sciences Po, where he participated in an exchange program with Keio University in Tokyo, Japan.

After having served at the Consulate General of France in Tokyo from 1995 to 1997, M. Fieschi passed the examination at the Ministry of Foreign Affairs with a specialty in the Orient and was
admitted as Councilor of Foreign Affairs in March 1998.

Until 2001, he was in charge of disarmament and non-proliferation at the Strategic Affairs Directorate of the Ministry.

Afterwards he left for Tokyo where he was initially attached to the Japanese Ministry of Foreign Affairs (2001-2002) in the framework of an exchange of diplomats, then was named as First Secretary at the French Embassy, in charge of bilateral questions and domestic affairs in Japan (2002-2006).

He then joined the French Permanent Mission to the United Nations in New York as First Secretary in charge of human rights (2006-2009).

In August 2009, he joined the office of Prime Minister François Fillon as an advisor in charge of Strategic Affairs and Relations with European and Asian nations.

Named Consul General in Boston, he acted as the Head of the East Asia division in the Asia and Oceania Directorate at the Ministry of Foreign Affairs from May to August 2012. He started his position in Boston on August 13, 2012.

Fabien Fieschi taught Contemporary Japanese at Sciences Po in Paris and at the National Institute of Oriental Languages and Civilizations (1999-2001).

He is married and is the father of two children.