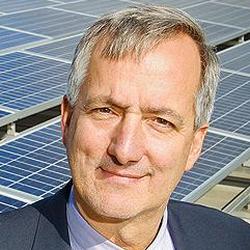 Phil serves on the board for the New England Clean Energy Counsel and FirstFuel as well as an advisory board member for Advanced Energy Economy.

He recently received the inaugural Innovation Award from the Northeast Energy and Commerce Association. Prior to Ambri, Phil served the Commonwealth of Massachusetts as Undersecretary of Energy and as Commissioner of the Department of Energy Resources, the state agency with primary responsibility for fulfilling Governor Deval Patrick’s vision for a clean energy future. Prior to his service in the Patrick-Murray Administration, Phil was senior vice president and board member at EnerNOC, a start-up providing electricity demand-management services to businesses, institutions, utilities, and grid operators that became a public company in 2007. He was previously a senior partner and leader of Mercer Management Consulting’s global energy utilities practice for 20 years. He started his career as a metals exploration geologist with Freeport-McMoRan and with Chevron. Phil is also active in the nonprofit realm. He helped found the Center for Effective Philanthropy and served as Board Chair for 8 years. He currently serves on the President’s Council of ACCION. In addition, he completed full terms on the boards of City Year Boston, First Parish Church of Wayland, and the Haitian Health Foundation. He was also the founding chair of Boston Cares. Phil is a geologist (B.S. from University of New Hampshire and M.S. in Economic Geology from the University of Arizona) and a management professional (M.B.A. from Tuck School of Business at Dartmouth College).